Are you between the Night and the Blood Elf in World of Warcraft? Let's see the pros and cons of each race and determine what's the best:

The Blood Elf is a Horde Race that begins their quest in Eversong Woods. They were elves tainted from the withdrawal of the faunt from the sunwell after Arthas had ruined it in the resurrection of Kel'Thuzad. They have 8 playable classes; Death Knight, Mage, Priest, Warlock, Hunter, Paladin, Rogue and Warrior. The Blood Elves make their home in Silvermoon City located in the Northern Eastern Kingdoms and make their way around the world on the Hawkstrider mount. Their racial abilities are primarily focused on Magic Resistance, Silence, and Enchanting. Here are the racial abilities for the Blood Elf listed below; 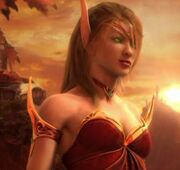 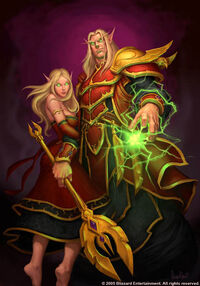 Arcane Torrent- Blood elves can disrupt magic, briefly silencing all enemy casters around them and restoring some of their own resources.

Arcane Affinity- Blood elves are skilled in the mystical arts and receive a skill bonus to enchanting.

The Night Elf is an Alliance Race that begins their quest in Teldrassil. The Night Elves are one of the original races of Azeroth that moved their location to Teldrassil after the World Tree in Nordrassil was destroyed in the Third War. They have 7 playable races; Death Knight, Hunter, Priest, Warrior, Druid, Mage and Rogue. The Night Elves make their home in Darnassus located on an island north west of Kalimdor, and make their way around the world on Nightsaber Mounts. The racial abilities of the Night Elf are primarily focused on being elusive and nature resistance. Below are the racial abilities for the Night Elves;

Shadowmeld- Slipping into the shadows and waiting for the right moment to strike is second nature to the elusive night elves. 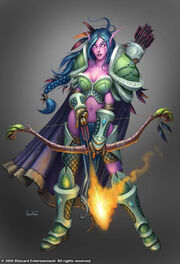 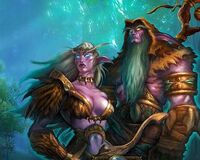 Quickness- The nimble night elves have a slight chance to completely avoid being hit by melee and ranged attacks.

Now, which one is better overall? The Blood Elf provides the player with 1 more playable race, has an additional spell casting interrupt and has magical resistance that helps with those pesky spell casters damage. The Night elf has one additional racial ability, can leave combat quickly with Shadowmeld, can avoid some damage by melee and ranged attackers and has a resistance to Nature magic... The short answer, both races are pretty balanced and provide no real advantage over each other. Create an Elf that you find physically appealing, that fits the faction you want to be a part of, and has the available classes to play that you want. Read the history of them both and find something appealing that would want you to join the ranks of the elite in each respective race.

As with most things in the World of Warcraft, there never really is a 100% correct answer. Find something you love, and go with it. Remember that the history and richness of the World is what makes half of the experience so great, so take your time, and learn what you can about your character to help enhance the playing experience! Thanks for reading and look forward to more WoW tips! For even more WoW character tips or to browse our large selection of WoW wallpaper visit us today.

Night Elf vs Blood Elf in World of Warcraft